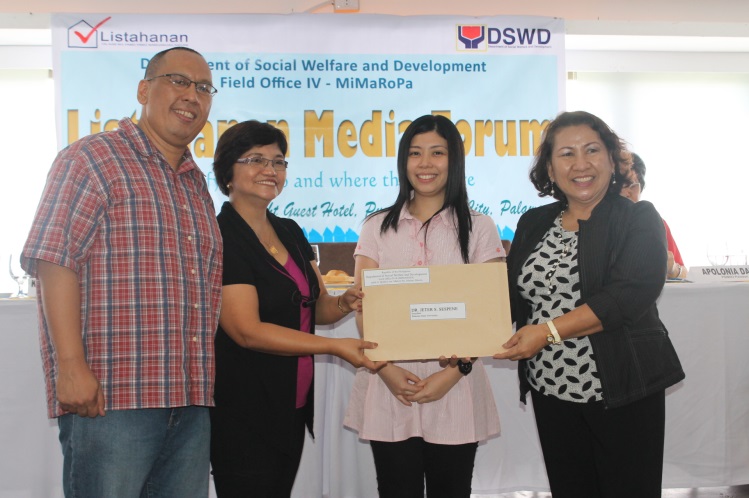 By PNA and Philippine Times of Southern Nevada

The Department of Social Welfare and Development (DSWD) in the MIMAROPA Region held a one-day media forum in this city in a bid for an information and dissemination campaign partnership for the second round of assessment of the Listahanan or the National Household Targeting System for Poverty Reduction (NHTS-PR).

The DSWD’s Listahanan, which carries the tagline “Talaan ng Pamilyang Nangangailangan”is “an information management system that identifies who and where the poor are in the country.”

Social welfare development Regional Director Wilma Naviamos explained in the media forum that Listahanan makes accessible to national government agencies (NGAs) and other social protection stakeholders a catalogue of poverty-stricken families that they may use in identifying prospective beneficiaries of social protection programs (SPPs).

“We are enlisting the help of the media community in Palawan in spreading the news about the Listahanan so that when we conduct the second round, they are prepared. This database project is important as it will give the government the leeway for the equitable distribution of resources and services to the poor,” Naviamos said.

The second round of the Listahanan will be held January to March next year involving a national target of 242,633 households in the MIMAROPA. Of this figure, the target for Palawan is 95,952 households identified as poor.

“Our target is ‘no one will be left behind’ in Listahanan, and the help of the media people in Palawan, who can translate its goals into local dialects so that people will understand, will be highly appreciated. We want you as partners in identifying who are the poor and where are they located in your places so that interventions can get to them,” Naviamos said.