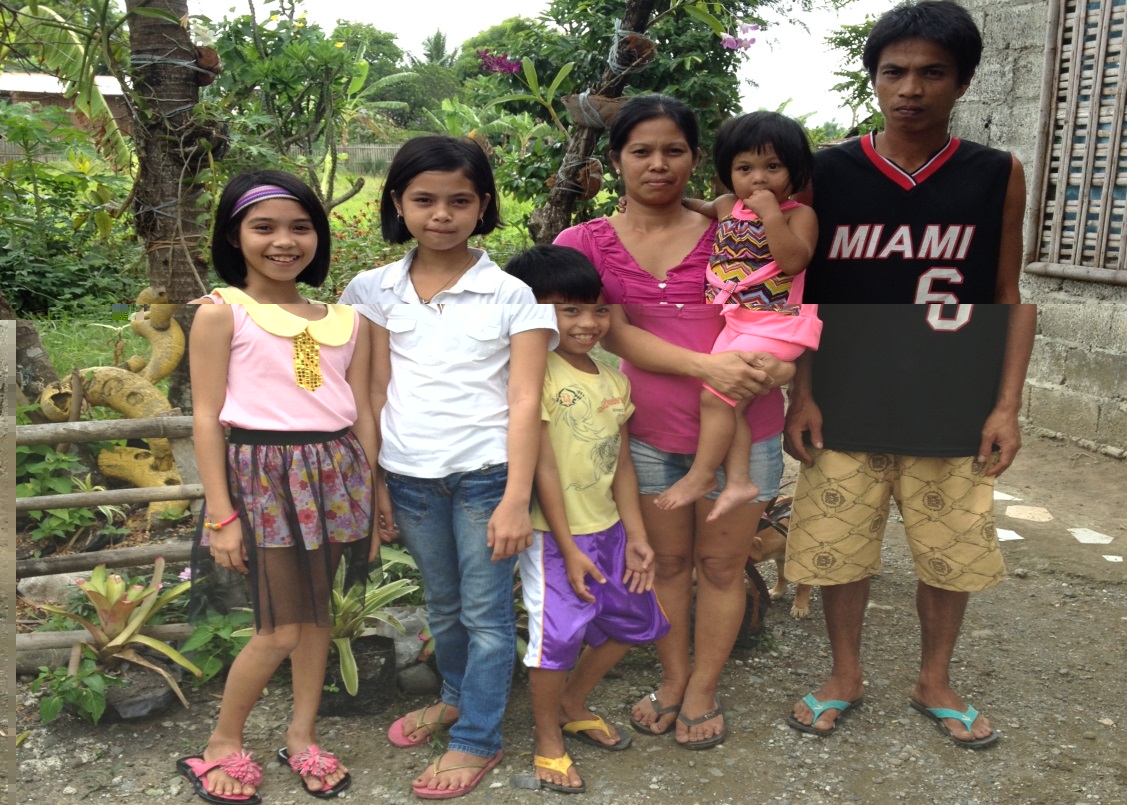 Poverty and family feud prompted her to leave town. Sixteen years later, Jenaline Antipatia Burgos returned but with no memory of what happened years back.

Jenaline was 17 years old when she left Barangay Rizal, Oton, Ilo-ilo to work in Valenzuela City as a house helper.  After five years, she moved to Quezon province to start a family with her boyfriend. Since then, her relatives in Iloilo never heard from her again.

On December 22, 2013, Jenaline finally came home to Oton, Ilo-ilo with her husband and four children. This was after the death of her youngest child.

“I am happy to be with my relatives again,” said Jenaline, who is now 34 years old. However, Jenaline does not remember anything before she moved to Quezon. When she returned to Iloilo, her relatives have to introduce themselves to her and tell her stories to refresh her memory. Her kin believed that her memory loss was the reason why she never got in touch with them when she left Valenzuela.

Nelma Antipatia, Jenaline’s aunt, is a utility personnel at the DSWD Field Office VI. She said that her family had been trying to locate Jenaline since they lost contact with her 11 years ago. They knew that she had left her employer in Valenzuela but they did not know exactly where she went afterwards. There were rumours about her running away with her boyfriend to Quezon province but nobody confirmed it.

In mid-2013, Nelma learned about Listahanan and its national database of poor households. She sought the help of the Mr. Anilo Luis Barrion, Listahanan’s Regional Information Technology Officer in finding Jenaline in the database.

“I tried my luck and asked Mr. Barrion if Jenaline is in the database,” said Nelma. Barrion then asked his counterpart in CALABARZON (the region in which Quezon province belongs) to search Jenaline in their regional database. And luckily, they found her name, along with the members of her family and their home address.

Through the database, Nelma also found out that Jenaline’s family is a beneficiary of Pantawid Pamilyang Pilipino Program, a child right’s based program of the DSWD that ensures children of poor families are healthy and in school.

Upon learning of Jenaline’s whereabouts, her family in Iloilo requested Ramil Escudo, her cousin who lives in Manila and works in a delivery truck company, to visit her. Sometime in November 2013, Escudo visited Jenaline in Barangay Banot, Sampaloc, Quezon where she is currently residing. Since then, Jenaline began communicating with her relatives in Ilo-ilo.

With the help of every member of the Antipatia family, money was raised so that Jenaline and her family could spend Christmas in Ilo-ilo.

“When she arrived, she could no longer recognize us. She just slightly remembers when we tell her,” Antipatia said. Jenaline is also inconsistent with her answers when one asks her questions. Her family believes that she may be suffering from amnesia and are hoping that they could send her to a medical professional.

Jenaline’s live-in partner, Francisco Ocfemia, however, believes that she is perfectly well, although he admitted that she never talked about her family or her past. He said that maybe she just didn’t want to keep bad memories.

Francisco, 33, was a security guard in Valenzuela City when he met Jenaline. He now, tends a small coconut farm in Quezon while Jenaline augments their income by weaving bags out of buri leaves.

Together, they have five children: Princess, 11, Grade V, Jennifer, 10, Grade IV, John Francis , 8, in Grade II and Jencil Joy, 2 years old. Their youngest child, Janzen, one year old, died on November 22, 2013 from an unknown illness. They were unable to bring him to the hospital due to financial constraints.

“Pantawid Pamilya has helped my family a lot because my husband is just making copra and sometimes,” Jenaline said. Jenaline received P2800 every two months from the program.

She proudly shared that if there are orders, she can make as many as three bags a day. “I don’t have any formal training. I just learned by observing others who are weaving bags.”

Jenaline dreams of someday transferring back to Ilo-ilo with her family. She hopes that Francisco will also favor her decision. “I want to live here and be near my relatives. We can earn a living from making and selling bags,” she added with hope gleaming in her eyes. (written by Wenna Berondo-Bendol)